At School No.14: Disease and Cleanliness

One former teacher reminisced on the state of the children at Floodgate Street in the 1920s:

“It was a very nice school but the children were very dirty. I remember they all had to have a bath unless they passed the cleanliness standard.” [MS1497/3/1 Miss Barton]

The first use of the new bathing facilities at Floodgate Street in 1905 gained a similar reaction:

“Commenced to use new bath yesterday… Some of the boys were so dirty that it took a half hour + in one or two cases 40mins to get them clean, the date of the last bath being so remote that the boys had forgotten it” [S68/2/1 29.6.1905]

This is not particularly a surprise considering the Birmingham School Board had to authorise extra cleaning in 1897 for Floodgate Street  School as the surrounding area was so dirty. [SB/1/1/1/13 27.2.1897] Sometimes the children used to be sewn into their winter clothes by their parents, and those supervising the baths would have to cut them out. [MS 1497/3/1 Miss Barton Oral History]

This general lack of hygiene for many of the children meant that illness and vermin were rife.

“Floodgate Street School had a building erected in the playground. Kids who’d got scabies used to go twice a week for sulphur baths. There used to be a nurse there and when it came to your head, she’d pick them up with big tweezers to get rid of the scabies…”

The bathing centre at Floodgate Street School was used by the surrounding schools too, and the Hygiene sub-committee of the School Board often had to deal with issues surrounding it.

On several occasions Floodgate Street was closed in order to stop the spread of Measles, Chicken Pox and Influenza. Sometimes an illness could catch the teachers off guard:

“Today at 4 o’clock, just as children were being dismissed, a little girl was suddenly taken ill. She made strange gurgling noises in the throat, said she was sleepy and then became quite unconscious.”

It was discovered a few days later that the child had Diphtheria, a disease which Tinkers Farm School, at least, recorded inoculating for in 1938. 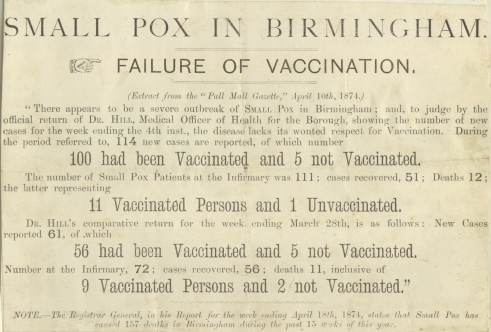 Yet vaccination for Small Pox originally met with opposition, as recorded by the Birmingham Poor Law Union Vaccination Committee minutes of 1874-5. This sentiment had evidently changed enough by 1938 for the Birmingham School Board to inoculate for Diphtheria.