This week’s post is written by Alison Hall, PhD student at the University of Birmingham, who is currently researching a series of photographs taken by Nick Hedges for the charity SHELTER . 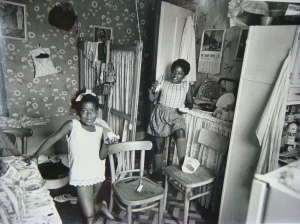 These photographs were taken between 1969 and 1971 by Nick Hedges (MS 2399). They were commissioned by the housing charity SHELTER and were used in their reports and advertising campaigns. In his role as the charity’s in-house photographer, Hedges attempted to record the terrible housing conditions that existed across the UK in the late 1960s. Many of his photographs were taken in cities such as Birmingham, Liverpool, Manchester, Bradford, Leeds, Glasgow and London. SHELTER succeeded in redefining homelessness to include people living in inadequate housing: homelessness was no longer limited to those living on the streets. The photographs reveal the hidden domestic lives of children and their families and were instrumental in changing people’s perception and understanding of homelessness.

Hedges tried to show the positive, as well as the negative, side of homelessness. In the photo above, the girls have been photographed in their one room flat. They are smiling and the room is homely and inviting. However, it is clearly overcrowded (it is possible to see the bed behind the girl on the left).

Appointments to view material held by Birmingham Archives & Heritage can be made via email at: archives.appointments@birmingham.gov.uk or by telephone on 0121 303 2468.